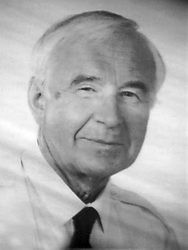 One of the BIG originals of veterinary orthopedics was Saki Paatsama. Born in an engineering family in Tampere, just 2 hours north of Helsinki in Finland, and with carpenters and boat builders in the family, Saki was preprogrammed to take a leading role in the carpentry of veterinary surgery.

Saki’s veterinary studies in Hannover, Germany (Tierärtztliche Hochschule) were interrupted by the 2nd WW, when he was called back to Finland to defend the country by caring for the army’s dogs and horses. After returning back to Germany he was imprisoned in a concentration camp. He managed to escape just before the Russian occupation and came back to Finland weighing less than 50 kilograms, which left irreversible damage in the tall man’s body.

After a few years on the Finnish country side with mixed practice, he jumped on an opportunity for advanced studies offered to young vets interested in devoting a career to academics. Finland didn’t have an own veterinary school, but one was now being planned and academic interest was in demand. Saki went to the Royal Vet School in Stockholm, where he explored among other things, the canine knee. This resulted in Finland’s own vet school’s first veterinary PhD thesis: “Ligament Injuries in the Canine Stifle Joint. A clinical and experimental study” in 1952. The Paatsama-operation, using a fascia lata strip to support the cruciate deficit stifle, was born. This technique, and it’s modifications, turned out to be the “gold standard” for three decades. Several other joint and bone pathologies were researched by Saki, which took him on numerous lecturing and teaching travels to both Europe and the USA.

He was also a member of the planning committee of the first vet school in Finland, which would be his home for more than 30 years, first as an associate professor and then as a full professor in surgery. This included parallel disciplines also such as anesthesiology, radiology, ophthalmology and neurology in both small animals and large, mainly horses. A huge task compared to todays standards. Furthermore, Saki lay the foundation of The Finnish Kennel Club’s breeding program, with screening routines for  hip-, elbow and hereditary eye disease.

A great visionary, hunter and fisherman and one of the fathers of veterinary orthopedics passed away in 1998, but his legacy lives on for generations to come.

In honor of Saki,

They made a difference

The pioneer of
modern veterinary

Professor Wolf-Dieter Prieur died on February 13, 2019 at the age of 92. With his passing his colleagues have lost an outstanding figure in veterinary medicine, the AO has lost an individual who was central to the development and the success of AOVET, and his family and friends have lost a man whose humanity and generosity of spirit shone through at even the darkest moments. Prieur was born on January 16, 1927 in Breslau (now Wrocław) Poland.